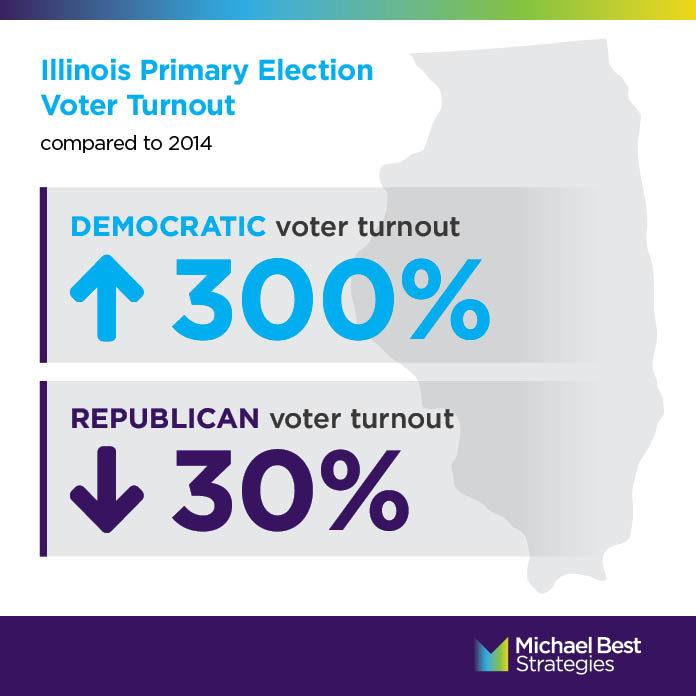 Primary Election Day in Illinois was March 20, 2018. The Republican and Democratic Parties chose their candidates for the November 6 General Election. Candidates wishing to run as third party candidates (in Illinois these candidates are labeled as Independent) do not file their nomination papers until June 18-25 to appear on the November ballot.

On the Republican side, voter turnout decreased by 30 percent compared to 2014. That year, there was a very competitive field for governor.

Incumbent Governor Bruce Rauner faced one challenger, State Representative Jeanne Ives. J.B. Pritzker won the primary in a field of six candidates, including State Senator Daniel Biss and Chris Kennedy. Governor Rauner won the primary on the Republican side and will face the Democratic candidate, J.B. Pritzker, in November. The matchup of two billionaires facing off against each other could likely turn this into the most expensive gubernatorial race in US history.

In Illinois, the candidate for governor chooses their running mate for lieutenant governor.

Incumbents for Secretary of State, Treasurer, and Comptroller will run for their seats again and ran in the primary unopposed. Republican nominees did not face primary challengers.

A number of candidates for Illinois House ran with opposition in the primary. Representative Daniel Burke, brother of Alderman Ed Burke, lost to first-time candidate Aaron Ortiz. On the Republican side, Representative David Reis lost to Darren Bailey. Incumbents winning their contested primaries include:

There are several members retiring, creating a number of open seats in November. Retiring members of the General Assembly are:

There are 39 seats up for re-election in the Illinois Senate. In the primary on March 20, one incumbent lost. Senator Ira Silverstein lost his primary election to Ram Villivalam. Senator Silverstein has been in the news since late last year due to claims of sexual harassment. The Legislative Inspector General investigated and found no evidence of sexual harassment, but did find that Silverstein acted in a way unbecoming of a legislator.

While not as many as the House, the Senate has a few retirements, creating open seats, as well. The Senators retiring include:

As attention in Illinois turns back to the General Assembly where they have until General Assembly has until May 31, 2018 to pass a budget, campaigning shows no signs of slowing down. Immediately after the primary, the Democrats held a unity breakfast, and Governor Rauner went on a three-day tour of Illinois. Candidates are expected to ramp up their campaign efforts significantly as we head to the General Election on November 6.