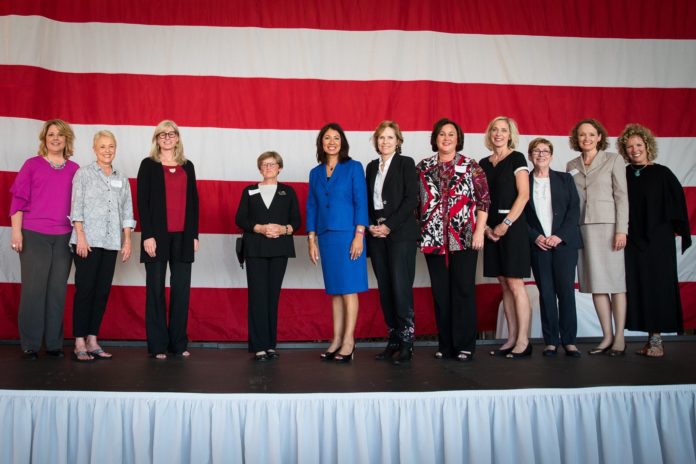 Wisconsin Women in Government (WWIG) recently recognized current and former cabinet secretaries who have served in Wisconsin state government in recent years. This event was a fundraiser for WWIG, which is a 30+ year old organization.

The current and former secretaries and commissioners in attendance included Michael Best Strategies’ Karen Timberlake. Timberlake served as the Office of State Employment Relations Director (2003-2007) and was the Department of Health Services Secretary (2008-2010). According WWIG, Timberlake is among just 41 women who have ever served as agency heads in Wisconsin state government.

“I really appreciated WWIG’s decision to pay tribute to current and former agency leaders,” said Timberlake. “I look back on my time serving the state with deep appreciation for the agency staff, our external stakeholder partners, my cabinet colleagues and Governor Jim Doyle, all of whom made my service in these roles possible. From the conversation and camaraderie in at the fundraising event, it was apparent to me that all of us who have had the privilege of serving in these roles, under any governor, have similar feeling about our work and the people who made it possible.”

Founded in 1987, Wisconsin Women in Government (WWIG), a 501(c)3 non-profit, is a bi-partisan volunteer organization that recognizes and supports women who choose to pursue a career in government by providing scholarships as well as educational, mentoring and networking opportunities. Since 1987, WWIG has raised over $1,200,000 for scholarships and programs.