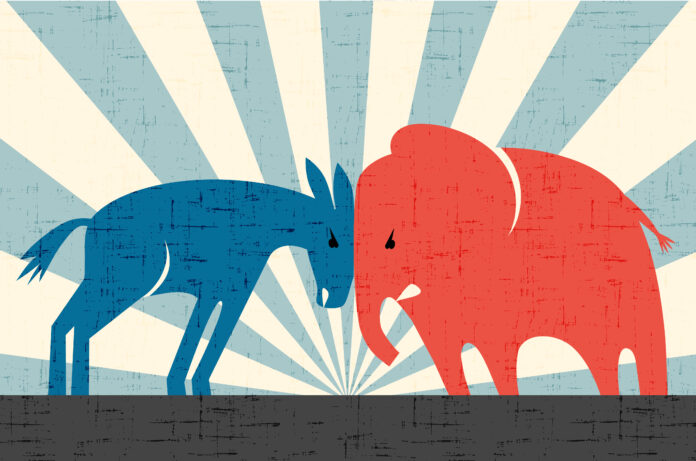 As the election draws near, Americans airwaves are lit up by the constant discussion about the security of our election, concerns about mail in or absentee ballots not being secure, as well as potential foreign intervention in our elections. The FBI and DHS just issued an alert on Saturday about discovering attempted hacking of federal, state and local government networks which could potentially be about election information housed on those networks. And there is plenty of discussion of both campaigns lawyering up prepared to challenge the results. This is clearly worrying Americans if you are looking at social media.

And one of the most disturbing topics being discussed about the election is what would happen if President Trump and former Vice-President Biden are in an Electoral College tie after election day.

How would Americans react to this, with the country already dealing with the extraordinary circumstances of the COVID-19 pandemic, a resurgent in many locations, as well as social and racial unrest? It is very concerning.

So how could that happen and what does happen if there is a tie? That is, both candidates get 269 Electoral College votes? The Constitution actually contemplated this, but it has been one of the most controversial parts of the Constitution.

In a presidential election you are actually voting for electors. Currently, there are 538 electors — 535 from based on the number in each state’s Congressional delegations and 3 from the District of Columbia. A majority of electoral votes, in this case 270 votes, is what is needed to be elected president.

The candidate who wins the most votes in each state, with the exception of Maine and Nebraska, is awarded all of that state’s electors. This is a decision made by law in each state. Instead, in these two states, one electoral vote is awarded to the presidential candidate who wins the popular vote in each congressional district, and the remaining two electoral votes are awarded to the candidate receiving the most votes statewide.

To add another twist to what is appears to be fairly clear, a July Supreme Court decision, Chiafalo v. Washington, requires that states have the power to require presidential electors to vote “faithfully” for their party’s candidate for president. Thirty-three states, along with the District of Columbia, require electors to vote for the candidate they have pledged to vote for. Five of those states provide a penalty of some sort for an elector who does not vote as he or she pledged to vote. Fourteen states provide for the vote to be canceled and/or the elector replaced. So not so clear.

Electors meet the first Monday after the second Wednesday in December after the presidential election which is December 14, 2020 in their state and vote for the offices of president and vice president. They do this on separate ballots. That vote is recorded on a “Certificate of Vote,” and it, like the Certificate of Ascertainment, is sent to the Congress.

Congress meets on January 6 in a joint session of the NEW Congress, not the old one, to count the votes submitted. When they are finished, they announce the winners.

Should no presidential candidate get a majority of electoral votes, the election shifts to the House of Representatives. In the House, each state gets one vote. The state’s delegation decides who they cast the vote for. They can choose between one of the top three vote-getters in the general election.

Whoever wins a majority of those votes — 26 — is elected president. The District of Columbia has three electoral votes but is not allowed to vote in this process since it is not a state.

To pick a vice president, the same process happens, only it would take place in the Senate.

If the House of Representatives fails to elect a president by noon on Jan. 20, the vice-president-elect serves as acting president until the tie is resolved in the House, according to the 20th Amendment.

Should the Senate be dead-locked and no vice-president-elect has been chosen by Jan. 20, the Speaker of the House will serve as president until the president and vice president are selected.

After hearing this you are probably saying that sound improbable. But just know that this part of the Constitution, the election of the President and Vice President, has been amended more than any other provision!

Early in our history, electors voted for two individuals without differentiating between the President and Vice President. The winner of the majority of all the votes cast, would win the presidency. The individual with the second largest number of votes would become Vice President. In 1796, this meant that John Adams became President and Thomas Jefferson became Vice President despite opposing each other for the presidency. Again in 1800, Jefferson and Aaron Burr, tied at 73 electoral ballots each. The House, then chose between Jefferson and Burr for President. The Constitution mandates that House Members vote as a state delegation with one vote and that the winner must obtain a simple majority of the states. The House deadlocked at eight states for Jefferson, six for Burr, and two tied.

After six days of debate and 36 ballots, Jefferson won. After the experiences of those elections, Congress passed, and the states ratified, the 12th Amendment to the Constitution. Added in time for the 1804 election, the amendment stipulated that the electors would now cast two votes: one for President and the other for Vice President.

Since the 12th Amendment, in 1824 another other presidential election came to a decision by the House. After Jackson won a plurality of the national popular vote and 99 votes in the Electoral College he was still 32 short of a majority. John Quincy Adams was runner-up with 85, and Treasury Secretary William Crawford had 41. The 12th Amendment required the House to consider only the top-three vote-getters when no one commands an overall majority. The House chose Adams over Jackson.

And finally, Congress was called on again in 1876 election between Democrat Samuel J. Tilden of New York and Republican Rutherford B. Hayes of Ohio. Tilden won the popular vote and the electoral count. But Republicans challenged the results in three Southern states, which submitted certificates of election for both candidates. While the Constitution requires the House and Senate to formally count the certificates of election in joint session, it is silent on what do with a dispute. So, Congress quickly established the Federal Electoral Commission in January after the election to review the disputed Electoral College ballots. The so-called bipartisan commission, which included both members of Congress and Supreme Court Justices, voted along party lines to award all the contested ballots to Hayes—securing the presidency for him by a single electoral vote. The Commissions’s partisan vote only avoided inciting violence in post-Civil War South because Republicans struck a compromise with Southern Democrats to remove federal soldiers from the South and end Reconstruction in the event of a Hayes victory.

A final note on the electoral college, is that five times in our history, most recently by President Trump in 2016, but also in 2000, 1888, 1876, and 1824, a President has lost the popular vote and still received more electoral votes, and in doing so became President.