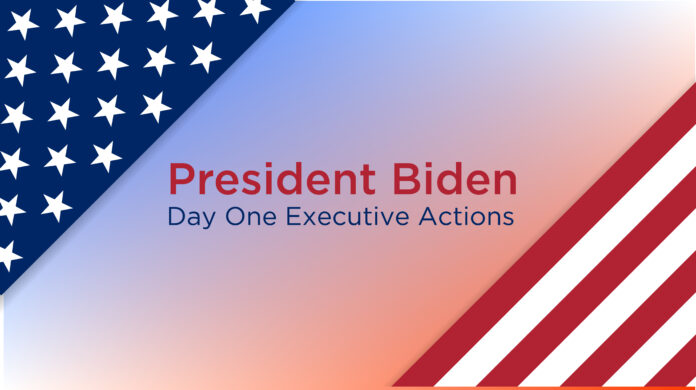 On his first day in office, President Joe Biden plans to issue 17 executive actions, including 15 executive actions, on climate change, immigration, COVID-19 response and other issues. Biden will sign the executive orders and memoranda in the Oval Office on Wednesday afternoon, around 5:15pm EST, his incoming press secretary Jen Psaki told reporters. Psaki and other top Biden officials said the first-day actions are only part of what will be a series of moves to undo Trump policies and implement Biden’s campaign promises in his first weeks in office.

Scroll down to bottom to see additional links of note on President-elect Biden First 100 days.

Re-Engage with the World Health Organization (WHO)

The order jumpstarts swift, initial action to tackle the climate crisis by:

In this Executive Order, the president-elect will also rescind the Trump Administration’s 1776 Commission. And, he will revoke former President Trump’s damaging executive order limiting the ability of federal government agencies, contractors and even some grantees from implementing important and needed diversity and inclusion training.

Ensuring the Federal Government Works for The American People

Today, the White House Chief of Staff will also issue a regulatory freeze memo that will pause any new regulations from moving forward and give the incoming Administration an opportunity to review any regulations that the Trump Administration tried to finalize in its last days. The memo directs all agencies to confer with the Director of OMB before renewing any regulatory activity. This action will allow the Biden Administration to prevent any detrimental so-called “midnight regulations” from taking effect, while ensuring that urgent measures in the public’s interest can proceed.

FACT SHEET: President Biden Sends Immigration Bill to Congress as Part of His Commitment to Modernize our Immigration System