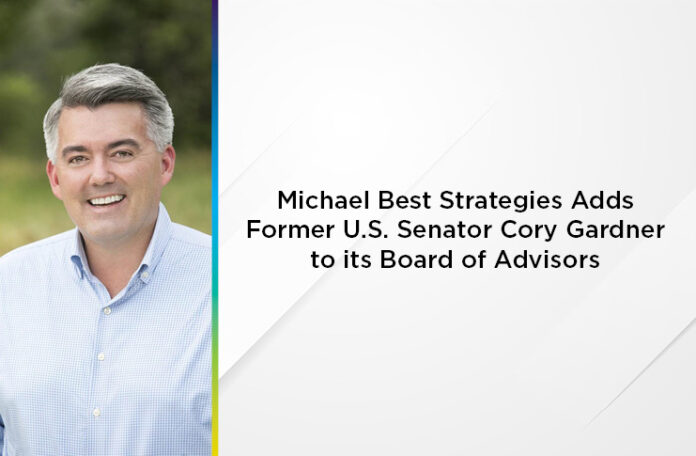 Michael Best Strategies is pleased to announce that Former U.S. Senator Cory Gardner has joined as a member of its Board of Advisors.

Gardner honorably served in the United States Senate from 2015 to 2021. During this time, Gardner was elected to the majority leadership team to serve as the Chair of the National Republican Senatorial Committee from 2017 to 2019. After the midterm elections in 2018, Gardner became one of only two Republicans to hold statewide elected office in Colorado. In addition to Chairing the NRSC, Gardner served on a number of powerful Senate Committees, including the Senate Committee on Foreign Relations and the Senate Committee on Commerce, Science, and Transportation. Sen. Gardner authored the landmark Great American Outdoors Act and is a leading voice on U.S. policy in the Indo-Pacific.

“Cory is an efficient communicator and leader, and has an extraordinary track record of success in an array of policy and legislative matters,” said Reince Priebus, Chairman of the Board of Advisors at Michael Best Strategies. “As another tenured former government representative joins our board, Cory’s addition will greatly benefit Michael Best Strategies as we continue to deepen our leadership and advisory positions with former lawmakers,”.

As a member on the Michael Best Strategies’ Board of Advisors, Gardner will collaborate with the firm on business development and public policy, while providing strategic advice and counsel to clients.

“Cory’s strong relationships make him a great addition to Michael Best,” said Rob Marchant, President of Strategies. “With the knowledge he has accrued after serving for over ten years in office at both the national and state level, his unique experience finding bipartisan solutions will further strengthen the firm’s ability to serve our clients and help them achieve their business goals.”

“I’m thrilled to be joining Strategies’ Board of Advisors,” said Gardner. “Strategies has a well-deserved reputation as a nationally leading government relations firm, and I’m looking forward to beginning my work with the team.”

Prior to being elected to the U.S. Senate, Gardner represented Colorado’s 4th Congressional District in the U.S. House of Representatives from 2011 to 2015. During this time, he was an active member of the House Energy and Commerce Committee. Before making his way to Washington, Gardner served in the Colorado State General Assembly as a State Representative from 2005 until 2011. Gardner earned his B.A. from Colorado State University, and his J.D. from the University of Colorado, Boulder.