Dean Neubert — a small business owner from Hortonville and Republican candidate for the state’s 6th Assembly District — is staying silent on whether he’ll request a recount in the 6th AD’s Republican primary. The six-way GOP primary left Neubert trailing his opponent, Peter Schmidt of Bonduel, by just 63 votes. According to unofficial returns, Schmidt had 2,156 votes to Neubert’s 2,093 votes. Although state law allows any candidate to request a recount if the margin is less than 1%, Neubert would have to pay for the recount because his vote deficit is more than 0.25%.

The 6th AD is a plus-35 GOP seat. The 6th AD’s incumbent representative, Gary Tauchen (R-Bonduel), announced his retirement over a year ago. The winner of the GOP primary will face Democrat William Switalla, of Wittenberg, in the November general election. 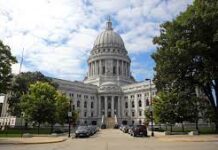