This week’s edition of “Capitol Insights” contains all information related to Wisconsin government and politics from the shortened week. The Michael Best Strategies Wisconsin team will be out of the office the remainder of this week. We hope you have a great Thanksgiving holiday, and want to take this opportunity to thank all of our clients and friends for their continued support!

State Senator Alberta Darling (R-River Hills) announced on Wednesday her retirement from the state Legislature via press release, as well as a resignation letter submitted to Senate President Chris Kapenga (R-Delafield). Darling did not cite a reason for her decision to retire in the middle of her eighth term in the Senate. In the letter given to Kapenga, Darling said, “Serving requires many sacrifices and I look forward to giving family and friends my full attention.”

Darling was first elected to the state Assembly in May 1990 during a special election. She won her seat in the state Senate in 1992. She was the longest serving woman co-chair of the Joint Finance Committee, and stated that during her time there she “made sure each and every dollar was spent prudently knowing this money comes from the hardworking people of our state.”

Senate Majority Leader Devin LeMahieu (R-Oostburg) issued a statement regarding Darling’s announced retirement that read in part “Throughout her years in office, Alberta was a fundamental part of this caucus and the state Senate. Her absence will be felt for years to come. She was a mentor and supporter to so many. Her service to the people of Wisconsin and the 8th Senate District was unsurpassed.”

The Evers administration announced this week that it now expects a $6.6 billion budget surplus at the end of the fiscal year on June 30th. This is well above the previous estimates, which predicted that the surplus would be just above $5 billion. The sunny budget outlook is largely due to an increase in state tax revenue, particularly from the individual income tax and sales tax. For FY 2022-23, overall state tax revenues are forecasted by the Department of Revenue to be $21.293 billion which would be $744.2 million more than those received in the previous fiscal year.

Also on Monday, the Department of Administration (DOA) provided its first look at the 2023-2025 budget, in which the Department stated that it expects an additional $1.5 billion in revenue growth over the 2023-2025 biennium. DOA also revealed that the state agencies have requested an increase of $3.6 billion in new general purpose revenue over the next biennium. With the projected surplus and the expected growth in revenue, this means that the state could fund every agency request and still have $4.4 billion left in the general fund. In addition to the remaining dollars in the general fund, the report also noted that the state has more than $1.7 billion in its rainy day fund.

Johnson and Roys appointed to JFC 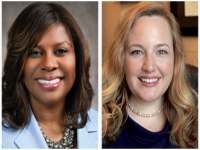 Nov. 21 announcing she had appointed Sen. LaTonya Johnson (D-Milwaukee) and Sen. Kelda Roys (D-Madison) to the state’s powerful Joint Finance Committee (JFC). “Our state leaders should reflect our state’s population. I am proud to appoint two badass moms who highlight the diversity of our Democratic caucus,” Agard’s statement read. “When women and moms are at the table we all do better. I look forward to seeing all that Senator Johnson and Senator Roys will accomplish on this important committee as they work to create a state budget that works for every Wisconsinite.”

While Johnson has served on the JFC since 2018, this will be Roys’ first Session serving on the committee. In a statement commenting on her appointment, Roys thanked Agard for selecting her and said “Thanks to Gov. Evers, Wisconsin has an historic $5 billion budget surplus. Now is the time to make critical investments in Wisconsin families that are long overdue – from funding local government services and public schools to advancing tax fairness by reducing taxes on everyday Wisconsinites. I look forward to serving on Joint Finance and hearing from our fellow Wisconsinites about their needs and priorities.”

Department of Natural Resources Secretary Preston Cole announced that he will be retiring next week, leaving the position unfilled. In a press release, Secretary Cole stated, “I will continue to stand with Gov. Evers as a Wisconsinite, colleague, and friend. Thanks to Gov. Evers for ushering in a new era of environmental protections and conservation programs. His efforts to put the well-being of Wisconsinites first continues to resonate in every corner of our great state. I have no doubt that in his second term he will continue to put the people of Wisconsin first.”

In response to Sec. Cole’s retirement, Governor Evers released a statement saying, “Preston has been an integral part of my administration since day one, and we are sorry to see him go. With his help, we brought science back to the DNR, we helped ensure Wisconsinites have cleaner, safer water, and we are tackling climate change head-on, all while supporting our state park system and the outdoor recreational economy that so many Wisconsinites and visitors enjoy.”

Senator Robert Cowles (R-Green Bay) and Representative Joel Kitchens (R-Sturgeon Bay), both of which are chairmen of their houses’ natural resources/environment committee, also released a statement in response to Cole’s announced retirement:

“We want to thank Secretary Cole for his more than a decade of service to the State of Wisconsin as a member on the Natural Resources Board and as Secretary of the Department of Natural Resources. We had the pleasure to work with him on a number of issues over the years, and his willingness to approach many issues outside of partisan politics was always appreciated. His dedication towards bettering the state’s environmental and public lands was well recognized, and he leaves big shoes to fill for those looking to find a suitable replacement for this important job. We wish Secretary Cole all is best in the next chapter of his life.”

As he enters his second term, Democratic Attorney General Josh Kaul is optimistic about

working with the GOP-controlled state Legislature. This week Kaul discussed his priorities for his new term, which includes funding school safety, implementing gun safety measures, and propping up the public defender system. He is most optimistic about reforming the state’s bail system, where he believes that he will find the most common ground with Republicans. Kaul hopes to exchange the current system for a system where a judge can keep someone in custody if they’re a danger to the community or a flight risk. The AG’s budgetary goals are focused on public safety and include the need for a $115 million legislative package that Kaul calls the “Safer Wisconsin Plan.”

Senate Majority Leader Devin LeMahieu (R-Oostburg) and Assembly Speaker Robin Vos (R-Rochester) spoke at a luncheon in Madison hosted by WisPolitics on Nov. 22. The luncheon came on the heels of an announcement by the state Department of Administration that a $6.6 billion budget surplus is expected at the end of FY 2023. At the luncheon, both Vos and LeMahieu said Governor Tony Evers (D-Plymouth) has left them voicemails to schedule a time to talk. Vos said he spoke with Evers for five minutes “which was good because that was five minutes more than in the past two years,” he added.

Vos said his priorities are cutting taxes while still funding core services. He wants to change the tax code to make the state more appealing for young people, which would address the workforce shortage. The Speaker indicated he’d be willing to increase shared revenue with municipalities, but that “revenue without reform isn’t going to happen.” Vos also reiterated his call for universal school choice. “Well, if it’s good enough to go from one public school to another, and we’ve already accepted that school choice is settled law, I don’t know why we couldn’t say pick any school that you want, public or private,” Vos said.

LeMahieu, for his part, indicated he would not support using part of the $6.6 billion budget surplus to send one-time tax rebates to taxpayers calling the proposal from Evers a “gimmicky one-time thing.” Instead, LeMahieu reiterated his call for “transformational, once-in-a-generation tax changes,” that would include a flat income tax and elimination of the personal property tax. The Majority Leader said there will need to be a give-and-take from both the GOP-controlled Legislature and Evers administration if either side wants to accomplish some of their main priorities. “I think if we can get some big wins, we can also give on some issues and find some of that common ground in negotiation,” LeMahieu said.

Last week while touring Plumbers Union Local 75 Training Center in Madison, Evers said he couldn’t envision signing a budget lowering the state’s top income tax rates as proposed by LeMahieu. The newly re-elected governor also said he was skeptical of a proposal from Vos to boost K-12 funding in exchange for universal school choice. “I want to see the numbers. But I don’t know how you can expand choice and fully fund schools,” Evers said. Evers promised his upcoming budget will “be looking at the middle class.”