ATTENTION CLIENTS: Registration is now open for the 2023-24 Legislative Session. Principals will need to be re-registered prior to any lobbying done on your behalf in January. Keep in mind that topics will need to be added when registering, this ensures that all issues are covered before bills or the budget are introduced. If you have any questions, please reach out to: Tyler Foti (tjfoti@michaelbeststrategies.com or o:608-257-7472 m:262-951-1826).

Gov. Tony Evers (D-Plymouth) and Lt. Gov.-elect Sarah Rodriguez (D-Brookfield) announced their official Inauguration Ceremony will take place on Jan. 3 at 11 a.m. The swearing-in ceremony will be followed by the 2023 Inaugural Gala that evening at 7 p.m. at the Monona Terrace Community and Convention Center in Madison. 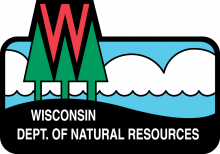 Despite the unanimous vote, some NRB members voiced skepticism about the real-world impact such a rule would have. “I don’t think we should be overselling that as soon as this passes, PFAS is going to go away, because it’s not,” said NRB Chair Greg Kazmierski. “At this point, it’s a much bigger problem. And over time, I’m not even sure if we have the capabilities to correct it when it’s in our groundwater.” Other board members said Wednesday night’s vote was only the first step in a comprehensive strategy to address PFAS contamination. “We need a standard to initiate prevention and this is just one very, very small step on an extremely long and complicated journey,” board member Bill Smith said. “But it’s time sensitive. It’s important that we open that door and we start the discussion, we get the standard so we can really start effective prevention out there.”

Business and environmental groups both weighed in following the vote. Midwest Environmental Advocates staff attorney Rob Lee applauded the decision. “Wisconsinites in Wausau, Marinette and La Crosse and elsewhere have a right to safe water,” Lee said. Yesterday, the NRB chose to put their interests over the interests of industry and PFAS polluters.” On the business side, Wisconsin Manufacturers and Commerce (WMC) Executive Vice President of Government Relations Scott Manley promised the group would closely follow the rulemaking process. “WMC will closely monitor the rulemaking as it moves forward to ensure DNR staff follow the law, and produces a rule that is practical, fair, cost-effective, and based upon sound, peer-reviewed science,” Manley said in a statement. 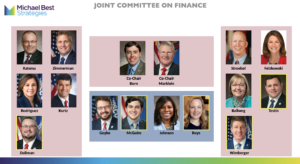 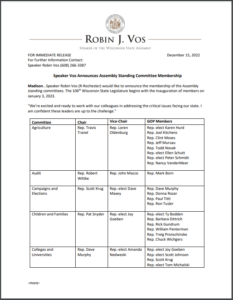 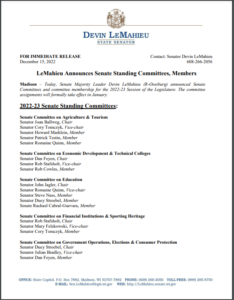 Speaker Vos also signaled that any future tax cuts would be applied across all tax brackets, and not just to low and middle income households. “They all deserve relief,” Vos said. “I don’t think we can just keep focusing on the one bracket, it has to be all brackets.” Rep. Haywood disagreed, arguing any tax cuts should favor low and middle income households. Alluding to the $6.6 billion surplus, the Legislature’s youngest member said “I think we have an amazing opportunity to support the middle class and grow the middle class − raise folks from out of the lower class and get them into the middle class.”

Gov. Evers will send his budget proposal to the Legislature on Feb. 15.

While speaking at a MacIver Institute event this week, Senate Majority Leader Devin LeMahieu (R-Oostburg) announced Senate Republicans are working on a plan to implement a flat 3.5% income tax in Wisconsin. According to Majority Leader LeMahieu, the flat tax would be phased in over a two to four year period and would consolidate the state’s current income tax brackets into a single 3.54% rate. Referencing the $6.6 billion projected surplus, the Majority Leader said “We have the resources to do this [flat income tax]…If we do this in Wisconsin it will just be huge.”

Gov. Tony Evers (D-Plymouth) has said on multiple occasions that he would not sign a budget that lowers the state’s top income tax rates. In November, Gov. Evers proposed a plan that would cut income taxes by 10% for middle class taxpayers while leaving the top rate of 7.65% in place. According to the Department of Administration, a flat income tax of 3.54% would decrease state revenues by roughly $4 billion each year without identifying alternate revenue streams to offset the reductions.

The Study Committee on Occupational Licenses approved nine preliminary draft bills on Dec. 13, including proposed actions that would increase the speed of issuing occupational licenses, as well as provide additional transparency about the applications process. The Department of Safety and Professional Services (DSPS) has faced increasing scrutiny over the past few months from legislative Republicans who have questioned the length of time it takes the agency to issue occupational licenses. DSPS has in response pointed to short staffing and inadequate funding as reasons for the backlog in issuing licenses.

One of the draft bills approved by the study committee aims to reduce the backlog by allowing DSPS to enact a four-year renewal period for health and business professionals instead of the two-year renewal period currently allowed. Another measure approved clarifies that the renewal date is the day a license expires, after which a renewal application must be completed. On the issue of transparency, the study committee approved a draft bill that would require DSPS to report the number of first-time and renewal applications it received, as well as the number of licenses issued by DSPS and any credentialing board since the prior report. The measure would also require DSPS to provide the median number of days from the date the application for an occupational license was started to when a credentialing decision is rendered.

According to WisPolitics, a spokesperson for the study committee’s chair, Sen. Rob Stafsholdt (R-New Richmond), said no formal plans have yet been made to introduce any of the preliminary draft bills during the upcoming legislative session.

State Representative Dave Steffen (R- Green Bay) said this week that the “time for action is now” for replacing Green Bay’s prison. He is looking to add a measure to replace the 19th-century facility with an updated $500 million facility in the upcoming budget. The current prison has a capacity of 950 inmates and Rep. Steffen’s proposed new facility would have a capacity of at least 800. A study in 2009 found the prison needed more than $140 million in repairs, and in 2017 Rep. Steffen introduced a bill to sell the prison and replace it which did not advance. In January 2019, Gov. Evers stated that the facility is “over 100 years old and seemingly needs to be replaced,” but added that it was illogical to build a new facility when the state is trying to “reduce the prison population and encouraging rehabilitation instead of incarceration.” Rep. Steffen says that the “time for action is now; the money is available.”

Gov. Evers included $12.5 million for a new health services unit at the prison in the last biennium budget, which Rep. Steffen stated was “putting in brand new hardwood floors in your house about to be condemned.” Speaker Robin Vos has vowed to “take a look at the bill and discuss it in caucus [and that there is a]…need to look at our entire correctional system. Spokesperson for Gov. Evers, Britt Cudaback, stated that “any plan to close the Green Bay Correctional Institution must be comprehensive and considered holistically.” Senate Minority Leader Melissa Agard (D-Madison) acknowledged that there is “very real issues” at stake with the correction facility, but that the “devil is in the details,” and that we need to seek a comprehensive fix for “racial disparities in policing, reducing the prison population, and legalizing marijuana.”

The Legislative Audit Bureau (LAB) recommended this week that the Evers administration increase transparency over how it has decided to allocate a portion of the $3.7 billion in federal COVID-19 relief funds. The audit additionally looked at the nearly $1.9 billion that has yet to be distributed as of June 30th, and requests the Evers administration’s plans for the remaining funds. The Legislative Audit Bureau in its report stated that the Department of Administration had not provided documentation on how it had worked with the governor’s office to decide on discretionary funds, but instead stated that those decisions were made “during daily conversations” and not in written documents.

In response to the audit, DOA Secretary Kathy Blumenfeld wrote that the administration will update the Legislative Audit Committee by February 17th, and will then provide information on efforts to improve documentation on how the department decides to spend the money. “The critical need for both expediency and responsiveness in administering these funds so that the state could meet evolving needs both from a public health and economic perspective lent itself to decision-making that took place largely through near-daily conversations with the Governor’s Office and relevant agency partners,” Secretary Blumenfeld wrote.

Sen. Rob Cowles (R-Green Bay), co-chair of the Joint Legislative Audit Committee, stated that Evers had rejected any contribution from the Legislature on potential ways to use the federal money. In a tweet, Sen. Cowles stated that, “it is the role of the Legislature to serve as the state’s fiduciary, where tax dollars are allocated in open forum through the committee process. It is evident that the Legislature should have greater involvement on the allocation of the federal funds and receive consistent reporting about ongoing spending efforts.”

Currently, the LAB report states that the administration plans to spend the money on:

The report also details how money has been spent from June 30th through now, with the largest expenditures being:

Pfaff appointed to WEDC Board of Directors

Sen. Pfaff most recently ran for the 3rd Congressional District in November, in which he lost to Republican Derrick Van Orden. Sen. Pfaff was also rejected as Gov. Evers’ appointment as DATCP secretary by the GOP-controlled Senate in 2019.

The Republican Party of Wisconsin (RPW) elected Brian Schimming to be the new state chairman this past weekend. The state GOP’s Executive Committee unanimously voted to elect Schimming, who will take over from Paul Farrow, who left to focus on his re-election as Waukesha County Executive. The Republican Party of Wisconsin announced that Schimming will be paid, after the chair position has been a voluntary position for years. Some on the Executive Committee argued that the Party needed to make the switch to close the fundraising gap with state Democrats, who have a paid chair. Brian Schimming stated that there is “ not a moment to waste” now that he has been elected with a Supreme Court race this spring and the 2024 presidential race around the corner.

Randy Hopper, a former state legislator who was recalled from the 18th Senate District in 2011, announced this week he plans to join the race for the 8th Senate District which was previously held by retiring Sen. Alberta Darling. Hopper joins four other Republican candidates who have announced their plans to run in the special election, and said he was encouraged to run because of his support for former Gov. Scott Walker’s Act 10, which was the reason for his recall. When asked about entering the race, Hopper stated that, “The message I’m hearing is that people here want another Senator who will bring the courage of their convictions, a strong work ethic, and laser focus on issues people are facing every day. We need a senator who’s not afraid to lead on big issues and get things done.” In his professional life, Hopper owns Mountain Dog Media Inc., and is in his second four-year term on the Wisconsin Economic Development Corp. board.

The four other Republicans who have announced to run for the seat are:

The primary will be on February 21st ahead of the April Special Election. Nomination papers are due to the Elections Commission on January 3rd.