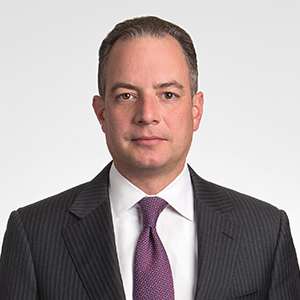 Chairman of the Board of Advisors

Reince currently serves as the Chairman of the Board of Advisors for Michael Best Strategies. Reince also serves as President and Chief Strategist for Michael Best & Friedrich, LLP. Prior to joining Michael Best, Reince was named White House Chief of Staff shortly after the 2016 Presidential campaign.

Prior to managing the White House staff, Reince served as the longest-serving chairman of the Republican National Committee in modern history. He oversaw a dramatic turnaround of the RNC, rescuing its finances, repairing its operations, and rebuilding its ground game while raising over one billion dollars. By welcoming new voters and harnessing the power of new technologies, Reince built the infrastructure needed for landslide GOP victories, and he left the RNC as the winningest chairmen of either political party in American history. He was named by Time Magazine as one of the 100 most influential people in the world in both 2016 and 2017.

Before serving as RNC Chairman, Reince was one of the most successful chairman of the Republican Party of Wisconsin creating the framework for one of the most historic election cycles Wisconsin has ever experienced. During his tenure, the state’s Republicans elected Ron Johnson to the U.S. Senate, elected Scott Walker as Governor, gained two additional U.S. House seats, and took back both the State Assembly and State Senate, while also defeating the democratic leaders of both of those chambers.

Reince previously served as a visiting Fellow at Institute of Politics at Harvard Kennedy School and is currently an officer in the U.S. Navy Reserve. Additionally, he is also an exclusive speaker with the world-wide speaking company, The Washington Speakers Bureau.

Reince and his wife, Sally, have two children, Jack and Grace.