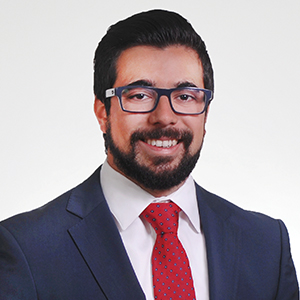 David uses a unique and creative approach to meeting his clients’ needs and objectives. As a Principal for Michael Best Strategies, he works with his colleagues to identify and implement strategic opportunities that bring valuable solutions, results, and success for his clients. David’s focus on government relations, issue and political advocacy, and public policy strategies has helped clients overcome individual business challenges and implement legislative or regulatory change.

His vast experience in helping to run one of the largest gubernatorial campaign’s in the history of Illinois has given him great insight into the political and legislative process. Prior to joining Michael Best Strategies, David served as the Statewide Field Director in the primary and general elections during Governor Rauner’s 2014 campaign. In this capacity, David oversaw 80 offices and 500 campaign staffers.

After that successful gubernatorial campaign, David worked on the Governor-elect’s transition policy team, and then joined the Governor’s Administration. David would later depart the Governor’s staff to work for a Presidential Campaign as the National Deputy Field Director and Nevada State Director.

Upon returning to Illinois in 2016, David worked as a political advisor to numerous legislative campaigns in the northern part of the state. In this capacity David worked on overall campaign strategy, messaging, television and digital advertisements, mail programs, polling, coalition building, and managing staff.

David’s bipartisan outreach philosophy and approach has provided significant value to Michael Best’s clients. Because of this focus,
he has delivered legislative, regulatory, and political victories for clients in a number of different industries.

David’s affiliations during his professional career: