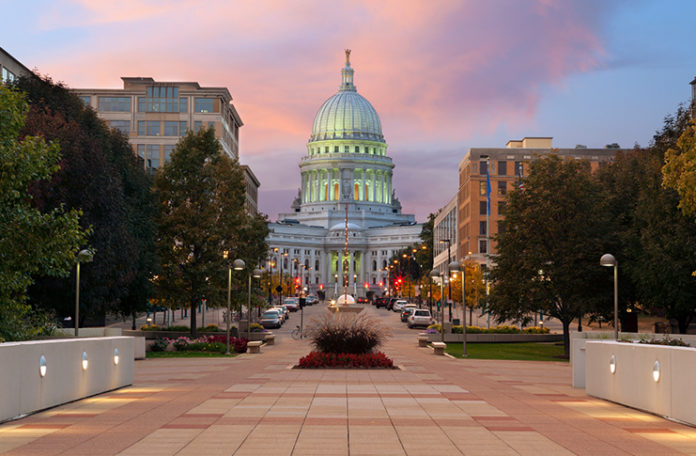 In our third edition of the Wisconsin Political Round Up, Nathan Houdek and Andrew Hitt take a closer look at both sides of the aisle’s fight to win at the ballot box this fall.

First up, Hitt dives into the Republican’s view. To jump down to Houdek’s take on the Democratic viewpoint, click: “Democrats Well-positioned to Win a Majority in the Wisconsin State Senate”

First, there is no chance the Democrats will take the Assembly this year.  In the Senate, Republicans have an 18 to 15 advantage over Democrats, so they can only lose one seat in the fall to retain control. Stated otherwise, Democrats have to grab two seats from the Republicans if they want the majority. Of the 33 Senate seats, only 17 are on the ballot in November. Of those 17, only one is genuinely competitive and that is the SD 17 swing district held by Republican Howard Marklein, who is one of the hardest working elected officials in Wisconsin. He knows his constituents and works hard for the benefit of all, irrespective of partisan lines. He is a true statesman.

The third open seat is held by Democrat Kathleen Vinehout who is running for Governor. Don’t bank on any of these seats to have a change in party, but Mel Pittman (R) has a good chance to take the seat away from the Democrats as he has been competitive against Vinehout in the past.

While Republicans and Democrats are playing offense in a handful of other districts, taking out an incumbent is always a challenge:

In addition to the split, instead of straight D wins in Wisconsin’s June special elections and the general ballot sliding backtowards Republicans — once a double digit lead and now only 6% —the latest Marquette poll is a good indication that Republican enthusiasm is on the rise, thanks in large part to the work of Governor Walker, Speaker Vos, and Majority Leader Fitzgerald.

Key numbers from the Marquette Poll: 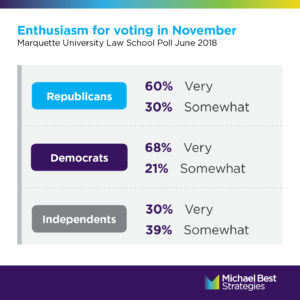 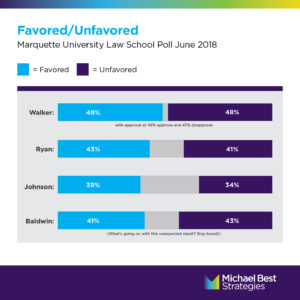 With numbers like these, Wisconsin’s Senate Republicans will hold onto their majority.  Republican enthusiasm matches the Democrats’ and both Republicans and Independents have a positive view of the current landscape in Wisconsin. Even Democrats think the economy will remain unchanged in the near future and with a less than 3% unemployment rate it is hard to make a case for change. However, there is no doubt Democrats will resort to things outside of Wisconsin to make their case. All politics is local and the Republicans will keep unified control coming out of the 2018 election.

2018 has been a strong year for Democrats in the Wisconsin State Senate as they continue to ride the Blue Wave toward a majority in November. Following a disappointing election cycle in 2016, where Democrats saw their minority shrink to 13 seats out of 33 in the state Senate, the tide has turned as Democrats have flipped two districts from red to blue in recent special elections. Democrats are now two seats away from a majority in the state senate and the partisan performance in the recent special elections indicates that momentum is clearly in their favor.

This year, 17 of the 33 state senate districts are up for re-election, all of which are odd-numbered districts. While the majority of the districts will not see much competition due to their heavy partisan lean, election watchers are keeping a close eye on six to eight districts that will determine the balance of power for the next legislative session. Democrats are defending three competitive seats – the recently won 1st district in the northeast, Sen. Janet Bewley’s seat (SD 25) in the far north, and the seat vacated by Sen. Vinehout (SD 31) in western Wisconsin. Of those, SD 1 is expected to be highly competitive, given the long-standing Republican lean of that district. SD 25 has also been competitive the past two elections cycles, but those were much more difficult political environments for Democrats. Sen. Bewley continues to be active in her district as she ramps up her re-election campaign.

Meanwhile, Democrats are playing offense in six seats where they see opportunity in the current political environment. Sen. Marklein’s seat (SD 17), in the southwest corner of the state, has been supportive of Democrats at the top of the ticket and at the state assembly level, but even with a 56% favorable performance, Senate Democrats have not been able to secure a victory in that district. Two vacant seats also provide strong pick-up opportunities: Sen. Moulton’s district (SD 23), in the Chippewa Falls area, and Sen. Vukmir’s seat (SD 5), in the west Milwaukee suburbs. Additionally, strong challengers against Sen. Roth (SD 19) in Appleton, Sen. LeMahieu (SD 9) in Sheboygan and Sen. Wanggaard (SD 21) in Racine, have Democrats feeling optimistic about the opportunities in those districts as well.

Admittedly, the historical partisan performance in the target districts is not overly favorable for Democrats. However, the current electoral environment, where Democrats have been consistently over-performing in elections across the country since the beginning of 2017, has seen time and again that historical partisan performance may not be as big of a factor this year. The evidence of Democratic over-performance has been overwhelming.

There were over 70 special elections for state and federal office in 2017. Across the board, Democrats performed approximately 12 points better than the historical partisan lean in those races.

And looking at the generic congressional vote polling data, Democrats continue to hold a 6-10% advantage according to Real Clear Politics. For comparison, the final generic congressional vote polling data on Election Day in 2006 was +7.9% for Democrats. That year, Democrats won the majority in the state senate in Wisconsin and cut heavily into the Republican majority in the state assembly.

The bottom line is that a favorable political environment, enthusiasm among their base voters, and a strong slate of candidates have Democrats well-positioned to win a majority in the Wisconsin State Senate this year. Flipping a state senate seat is never easy, but Sen. Democratic Leader Jennifer Shilling and her team have proven that they know how to take advantage of the current environment to win competitive races.