­­We are in the final weeks of the crucial 2018 mid-term election, and a cloud of uncertainty has been lingering over Illinois. Intense political battles have taken place throughout the past several years and have only intensified since the presidential election.

The outcome of the 2016 elections shocked not only the country, but the world. Are Republicans as fired up as they were in 2016? Will Republican turnout beat out Democrat turnout like it has in previous mid-term elections? Conventional wisdom might point to the contrary. Traditionally, the opposing party of the sitting president has voted in larger numbers—meaning 2010 and 2014 were great cycles for Republicans. The last significant midterm elections for Democrats were in 2006.

That said, President Trump provides a unique circumstance which could make it difficult to prognosticate turnout. His candidacy transcended political party lines (to an extent) and coaxed out voters who aren’t your usual high-propensity party-line voters, and who were not taken into consideration with most polling.

A poll released on October 14 by ABC/Washington Post projects Democratic enthusiasm, especially among women, to be significant across the country.

That enthusiasm gap is salient for a number of high-profile congressional races in Illinois that have become tier-one targets for Democrats.

Those congressional districts being targeted are:

The IL-12 and IL-13 districts are south of I-80, while IL-6 and IL-14 are located in the north and western suburban regions of Illinois. 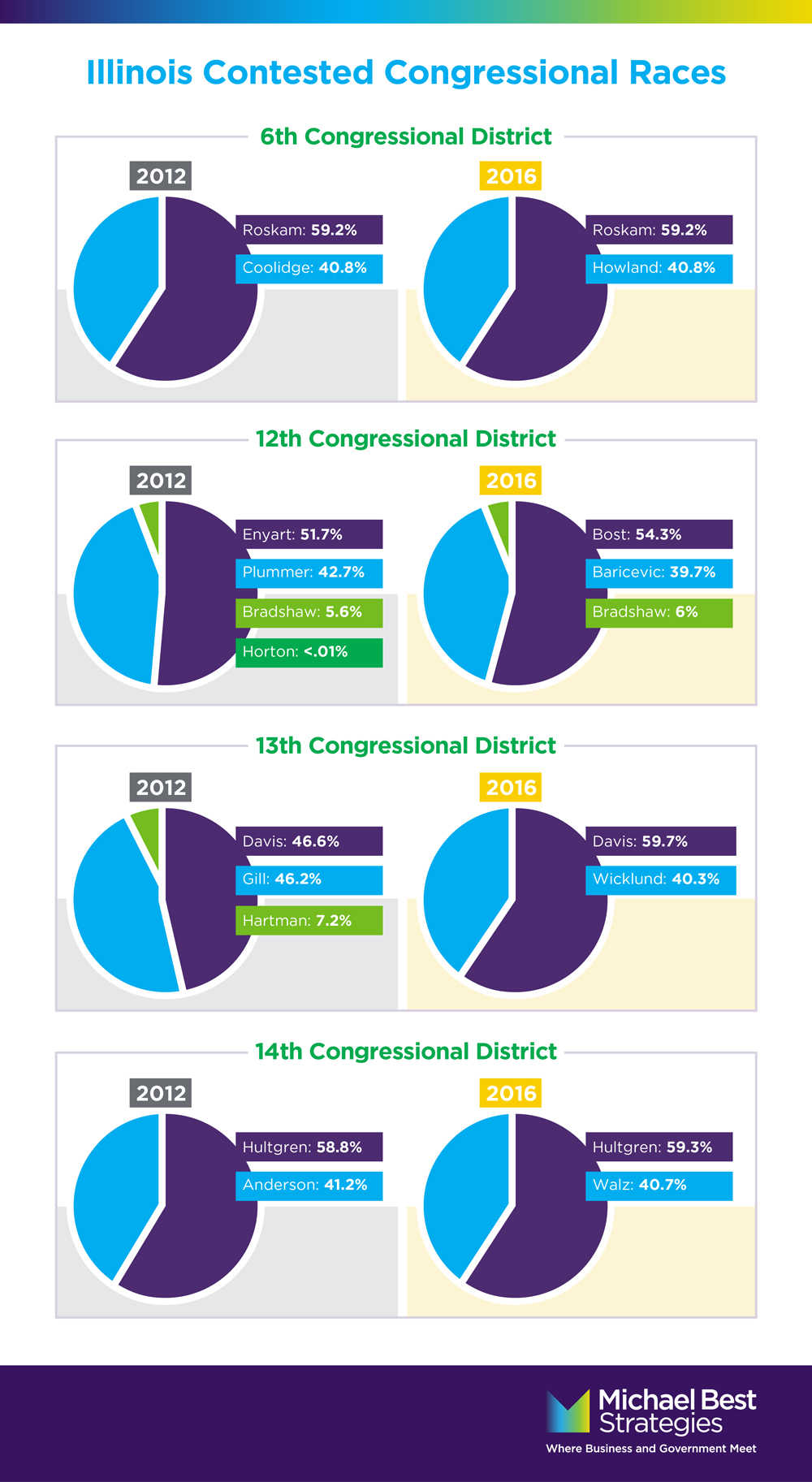 Each contested race has its own factors contributing to whether Republicans will have success on the night of November 6. For example, Congressman Davis has built strong name ID in his district since winning for the first time in 2012. President Trump won Congressman Davis’ district by five points, and Mitt Romney won by 0.3 points. Congressmen Roskam represents a district that Hillary Clinton won by seven points, but that Mitt Romney won by eight points in 2012. President Trump won Congressman Bost’s district by 15 points, and President Obama won it by one point in 2012. These races are true “toss-ups” at this point.

Larger Democrat turnout, plus the enthusiasm gap, could mean a long night for some Republicans. If Republicans lose the House of Representatives, the anticipated Democrat takeover of the governor’s office and once-strong Republican seats at the local level may as well have been inevitable. But, we live in a particular time when I wouldn’t be too quick to write off an unforeseen outcome.