ATTENTION CLIENTS: Registration is now open for the 2023-24 Legislative Session. Principals will need to be re-registered prior to any lobbying done on your behalf in January. Keep in mind that topics will need to be added when registering, this ensures that all issues are covered before bills or the budget are introduced. If you have any questions, please reach out to: Tyler Foti (tjfoti@michaelbeststrategies.com or o:608-257-7472 m:262-951-1826).

Gov. Tony Evers (D-Plymouth) today announced the dates for his 2023 State of the State Address and his 2023-25 biennial budget message. “Karen joined our administration at a critical time during the coronavirus pandemic, bringing with her a wealth of experience and expertise. We owe her our gratitude for returning to this role during an incredibly challenging time for our state, and there’s no question that she helped us save lives,” said Gov. Evers. “Even beyond her willingness to serve, Karen is an exceptional person who I’m proud to know and have been proud to have as part of my cabinet. I’m grateful for the opportunity to have served alongside her. I want to extend my sincerest thanks to Karen for her service to our state, and I wish her and her family well in their next chapter.”

“I want to thank Governor Evers for the opportunity to step back into this role. This has been an extraordinary time to be in public service,” said Secretary-designee Timberlake. “Thanks to Gov. Evers’ leadership and the creativity and dedicated efforts of our colleagues across the cabinet and throughout the agencies, Wisconsinites and communities are bouncing back from the effects of the COVID-19 pandemic, and the state’s future is full of potential waiting to be realized.”

Governor Tony Evers (D-Plymouth) announced in a press release that he would be holding three budget listening sessions before the end of the year, including one virtual listening session in addition to in-person events in Kenosha and Green Bay. Additional listening session locations and dates will be announced in the new year according to the governor’s office. “Since taking office, we’ve hosted conversations regularly to hear directly from the people about the challenges we face and the kind of future we want to build for our state,” Gov. Evers said. “These conversations have guided our work, from developing our priorities every day to preparing a budget that reflects the will of the people of this state. I can’t wait to get to hear from folks and families in the weeks and months ahead about the issues they care about most.”

WPF: State enters 2023-25 budget cycle in better financial shape than any cycle in past decade

According to a new report issued by the Wisconsin Policy Forum (WPF), the state’s general fund revenues are projected to exceed base spending by $6.8 million over the next two-year cycle. For comparison, during the 2021-22 budget cycle, projected revenue fell short of base spending by $373 million. To write its report, WPF analyzed projected increases in tax collections compared to base spending levels. The report did not factor in the rising cost of present services or new spending requests by state agencies.

The state Department of Administration recently projected a $6.58 billion surplus in the general fund to end the current fiscal year, as well as $1.73 million in its rainy day fund. The report from WPF noted that is an unprecedented surplus, with the $8 billion in combined reserves amounting to more than 42% of 2023 net appropriations. According to a report from the National Association of State Budget Officers, the states nationally are expected to average a reserve equal to 19.6% of appropriations in 2023.

Speaker Vos announced the following appointments to the JFC:

The Assembly Republicans will likely join the same set of Senate Republicans who previously sat on the JFC, aside from the two vacancies that still need to be filled by Senate Majority Leader Devin LeMahieu (R-Oostburg). Although Majority Leader LeMahieu has yet to announce those appointments, he told WisPolitics last month the same Senate GOP members who served during the current session would return. That list includes JFC Senate Co-chair Howard Marklein (R-Spring Green), Sen. Mary Felzkowski (R-Irma), Sen. Duey Stroebel (R-Saukville) and Sen. Joan Ballweg (R-Markesan).

On the Democratic side, Assembly Minority Leader Neubauer announced the following appointments to the JFC: 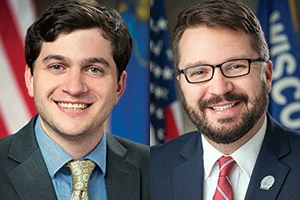 Rep. Tip McGuire (D-Kenosha) is the Assembly’s Democratic newcomer to the JFC while Rep. Evan Goyke (D-Milwaukee) has served on the committee since 2019. Rep. McGuire fills the seat vacated by Rep. Beth Meyers (D-Bayfield), who chose not to seek re-election this year. Neubauer’s appointments complete the slate of Democrats who will serve on the powerful budget-writing committee this session. Last month, Senate Minority Leader Melissa Agard (D-Madison) appointed Sen. LaTonya Johnson (D-Milwaukee) and Sen. Kelda Roys (D-Madison) to the JFC.

Hong appointed to WEDC Board of Directors

Hong (D-Madison) to the Wisconsin Economic Development Corporation’s (WEDC) Board of Directors this week. Rep. Hong replaces outgoing Rep. Gordon Hintz (D-Oshkosh) who chose not to seek re-election this fall. Rep. Hong is the co-owner of a Madison restaurant and was re-elected unopposed in November. In a press release announcing the appointment, Minority Leader Neubauer said “Rep. Hong is a fierce advocate for small businesses and with personal experience as a business owner, she will provide a critical perspective on the committee. Her thoughtful nature, dedication to the work and ability to connect with people across the state makes her an invaluable addition to the Board of Directors.”

launch their bids for office this week, including three Republicans and one Democrat. On the GOP side, State Rep. Janel Brandtjen (R-Menomonee Falls), Concordia University student Robert Albrightson, and Thiensville Village President Van Mobley all announced their candidacies this week. They join fellow Republican and state Rep. Dan Knodl (R-Germantown) who declared his intention to run last week. On the Democratic side, environmental law attorney Jodi Habush Sinykin of Whitefish Bay joined the race.

Rep. Brandtjen has served as the representative for the 22nd Assembly District since 2015. During the 2021-2022 Legislative Session, she served as Chair of the Committee on Campaign Elections. In a press release announcing her run, Rep. Brandjten vowed to “continue to fight for the principles that every American shares.” Rep. Brandjten was last re-elected to the Assembly in 2022 with 64.6% of the vote.

Van Mobley is serving a fourth term as Thiensville’s village president. He is also a history professor at Concordia University. Mr. Mobley told WisPolitics that if elected, his priorities would include enacting a bill adding exceptions to the state’s current abortion ban that would embarrass Gov. Tony Evers (D-Plymouth) if he didn’t sign it, reducing taxes, and supporting the consolidation of school districts and municipal services.

Jodi Habush Sinykin is a practicing attorney who specializes in environmental law and policy. She is a graduate of Nicolet High School who completed her undergraduate studies at the University of Michigan and attended law school at Harvard University. In a press release announcing her candidacy, Ms. Habush Sinykin said her priorities would include “the cost of health care, a woman’s right to make her own health and reproductive decisions, maintaining safe communities, ensuring a good education for our children, and finding ways to ensure that area businesses and jobs can both survive and thrive in these difficult economic times.”

for Milwaukee city attorney. The office is currently held by first-term City Attorney Tearman Spencer. First elected to the Assembly in 2012, Rep. Goyke is currently serving in his sixth term in the State Legislature. He was unopposed in his most recent re-election to the Assembly in 2022. Rep. Goyke was also recently reappointed for a third term to the Joint Committee on Finance. With the election for Milwaukee city attorney being on the spring 2024 ballot, Rep. Goyke will not have to step down from his legislative seat to run for the office.

With the GOP coming up short in unseating Governor Tony Evers (D-Plymouth) and Attorney General Josh Kaul, U.S. Senator Ron Johnson (R-Oshkosh) and other prominent Wisconsin Republicans are questioning whether now is the time to make the chairman of the Republican Party of Wisconsin (RPW) a paid position. “I’ve been talking to some of the individuals and saying I think we need a paid chairman, mainly because we need a long-term chairman,” U.S. Sen. Johnson told the Milwaukee Journal Sentinel. The discussion comes as Waukesha County Executive and current RPW Chairman Paul Farrow announced that he will not seek re-election to a full two-year term as party chair, instead putting his energy into running for a third term as county executive. If RPW were to pay its chairman, that would put it on par with the the Democratic Party of Wisconsin, which already has a paid chairman and has maintained a fundraising advantage over RPW in recent years.

WisPolitics reported that longtime RPW member Brian Schimming is the frontrunner going into Saturday’s vote by the Executive Committeee to determine wo will replace Chairman Farrow. The other three frontrunners all indicated they would not pursue the chairmanship. That list includes Waukesha County GOP Chair Terry Dittrich, RPW Third Vice Chair Jesse Garza, and Ben Voelkel, a former aide to U.S. Sen. Johnson.

Although the 2022 midterm elections are over, there will still be pivotal

elections occurring in 2023’s off-year elections. The Hill recently released a list of the top five races to watch in 2023 and Wisconsin’s Supreme Court race was ranked No. 3. That’s because the Court currently has a 4-3 conservative majority and the race in 2023 will be to replace conservative Justice Patience Roggensack, who is retiring from the Court in the summer. If a liberal justice were to replace Justice Roggensack, the ideological balance of the Court would move to the left for at least the next two years. That could have a significant impact on a variety of state issues ranging from abortion to legislative maps, and more.